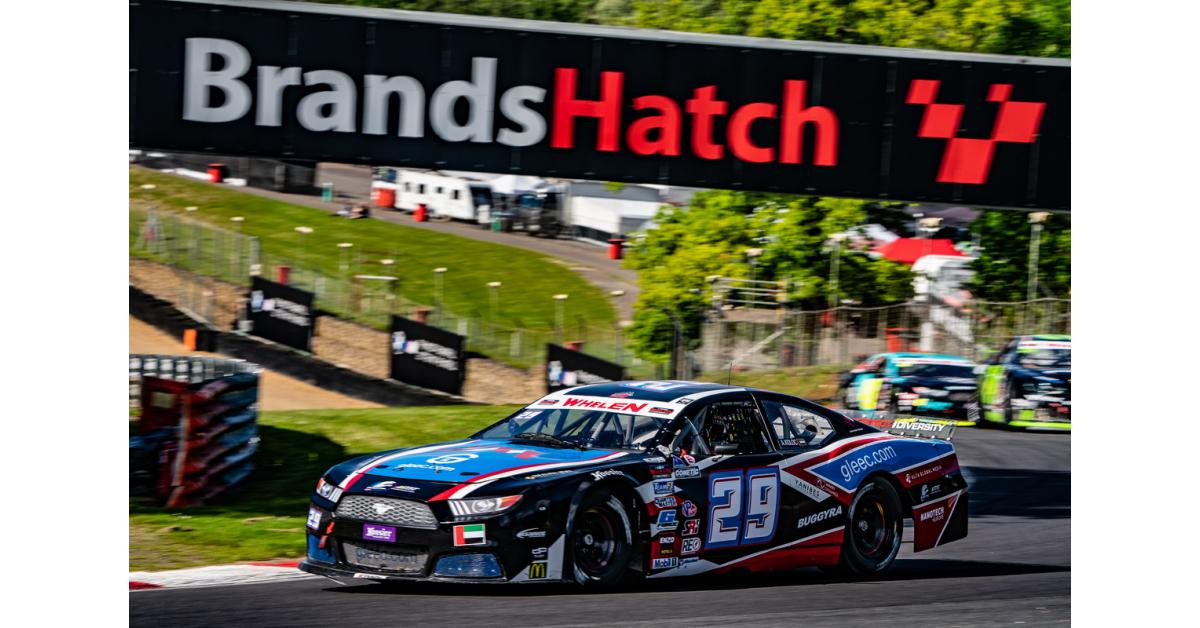 An up-and-down weekend which matched the profile of the Brands Hatch circuit in Kent, United Kingdom.

TALLINN, ESTONIA, June 14, 2022 /EINPresswire.com/ — The latest round of the EuroNASCAR season was an important lesson for Aliyyah Koloc and the Buggyra MFT squad on just how small the margins in racing can be. Out of the four races contested, two caused disappointment and two produced celebrations. Koloc bounced back from her misfortune with a 12th place overall in the second EuroNASCAR 2 race, first in the lady class – in a field of 29 cars around the tight and twisty Indy circuit configuration.

“It has been a crazy weekend at Brands Hatch, Saturday was not an easy day because we had some struggles with the setup of the car, but Sunday was a lot better,” said Ludovic Pezé, Team Principal of Motors Formula Team, Buggyra’s partner in EuroNASCAR. “Aliyyah was a lot stronger on Sunday, the setup of the car was far better from a performance point of view. The atmosphere was amazing; we cannot wait to get to the next race of the season at Vallelunga.”

Aliyyah had been due to be joined at Brands Hatch by her twin sister, Yasmeen Koloc, but the latter was missing due to her ongoing recovery from injury. As a result, Aliyyah will be the sole family representative in EuroNASCAR for the foreseeable future.

Having taken her first Ladies Cup victory on her series debut at Valencia last time out, Koloc came into the Brands Hatch meeting looking to build on her promising start to the season in the UK.

The weekend began well for Aliyyah, who set a 12th best time in the second practice. She qualified 25th on the grid, her combined time just over a second slower than the overall fastest.

In the opening race, Aliyyah kept out of trouble at the start and made progress to run as high as 17th in the early stages. She eventually dropped to 24th by the finish. The second race barely got going for Aliyyah, as she got caught up in an unfortunate incident on the eighth lap of 38. An innocent bystander, Aliyyah had nowhere to go on the main straight as a rival spun in front of her.

Aliyyah enjoyed a positive qualifying, which meant she lined up 17th for the pair of NASCAR 2 races. She was in the mix at the start of the first race, before a trip through the gravel at Paddock Hill Bend cost her a few positions. A technical problem then brought her Ford to a halt just after the safety car restart.

Things were better in the second race, with Aliyyah making progress from the back of the grid after repairs were required to her car to come home a respectable 12th at the finish. “The race was really crazy, the guys finished the car last-minute…like, really last-minute, so I had to start from the pits,” said Aliyyah Koloc post-race.

“So, I started last, but I managed to overtake a lot of cars before the safety car. And then at the restart, it was a bit tricky because people were braking, and I don’t know why. But it was a really fun race; the mechanics did such an amazing job fixing the car.”

The next race for Aliyyah will be the EuroNASCAR race at Vallelunga, Italy, on July 9-10.

A team with 50 years of heritage and among the world-leading racing structures and technology developers with their own Technology Centers in Dubai (UAE), the Czech Republic, and Spain. Buggyra ZR Racing started to gain racing success in truck racing with 11 European championships, three Chinese championships, and one Indian championship.

In 2014, the team entered cross-country rallying with Tatra trucks. This was followed by an entry into the SxS category, where they won the Can-Am category in 2021. The team also counts for six world speed records. Currently, Buggyra ZR Racing competes in Formula and GT series in addition to truck racing and cross-country rallying.

Motors Formula Team “MFT” is a one-stop motorsport agency and racing team based in Monaco and Mauritius that offers a large array of sport-driven as well as automotive- and racing centric services including pilot management, coaching, training, motorsports consulting, communication, Simracing, advertising and event planning. MFT stands out in the motorsports industry by its commitment to diversity, which in addition to benchmarking against industry standards, is at the very core of its strategy (Monaco Historic F1 GP / ELMS in LMP2 / F4 / Hillclimb in Formula / Drift and Slalom). In 2021, the team was acknowledged and mentioned in a case study by the Sir Lewis Hamilton commission.

Motors Formula Team was founded in 2014 by Ludovic Pezé, a 30-year-old French-Mauritian entrepreneur born and raised in Monaco. MFT is committed to integrating eco-efficient and environmentally safe standards, including transporting racing cars by truck to racing locations as much as possible and taking part in races where fuel and tires usage limitations are imposed.


EIN Presswire’s priority is source transparency. We do not allow opaque clients, and our editors try to be careful about weeding out false and misleading content.
As a user, if you see something we have missed, please do bring it to our attention. Your help is welcome. EIN Presswire, Everyone’s Internet News Presswire

,
tries to define some of the boundaries that are reasonable in today’s world. Please see our
Editorial Guidelines
for more information.

Post Malone has announced a North American tour in support of his new album Twelve Carat Toothache. The Twelve Carat Tour begins in September and […]

Sir Lindsay is known for his love of animals and Attlee is just the latest edition to his collection of pets (Picture: PA) There’s a […]