The euro dropped to within less than a cent of hitting parity with the US dollar for the first time in two decades as concerns swirled over Europe’s economic outlook and traders awaited a key report on the US jobs market.

The common currency fell as much as 0.9 per cent on Friday morning in London to $1.007, with many of its peers also declining as the dollar ripped higher. It has dropped more than 10 per cent this year.

Investors are growing increasingly worried over the euro area economy as it faces mounting headwinds caused by Russia’s war in Ukraine, which has helped to drive record inflation. Goldman Sachs warned on Thursday that the eurozone was “on the edge of recession” as Russia’s move to cut supplies of natural gas has sent prices of the vital fuel surging in Europe, something that has dealt a powerful blow to businesses across the region.

“The probability of recession in Europe is very high and recession risk has become more serious in the last few weeks,” said Salman Ahmed, global of head macro at Fidelity International.

Those worries have been reflected in the bond market, with the additional yield investors can earn from holding US Treasuries over German Bunds sitting at about 1.7 percentage points on Friday from around 1.5 percentage points in late June. A wider gap between these benchmark bond yields tends to be a boon for the US dollar as fixed income investors chase higher returns.

While the US has not been affected as severely as Europe by the war in Ukraine, concerns have also been increasing about whether Federal Reserve rates rises and high inflation could also prompt a contraction in the US.

A report due at 1.30pm London time (8.30am Washington time) on the US labour market is expected to shed fresh light on the trajectory for the world’s biggest economy.

Traders will focus on whether the unemployment rate has remained near pre-coronavirus pandemic lows and how fast wages are rising, as they look for signs that inflationary trends in the jobs market are easing enough for the Fed to scale back plans for aggressive interest rate rises.

“If you get falling unemployment and the [workforce] participation rate also going down,” said Brian Nick, chief investment strategist at Nuveen, “you get that overheating mix that gives the Fed the green light to keep going and that would be an unambiguous negative for the markets.”

“The other theme the market could latch on to,” said Marija Veitmane, strategist at State Street, “is if we get a weak number, that means a weaker economy, and that allows the central bank to be less aggressive.”

This scenario, Veitmane said, would be “bullish” for risk assets “in the short term, but not great news in the long run”.

With US inflation running at 40-year highs, the Fed raised its main interest rate by an extra large 0.75 percentage points in June and has signalled it may do so again this month. 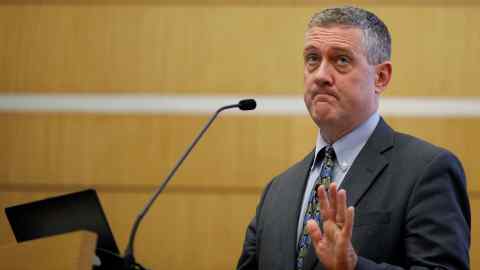 Equities traded cautiously before the jobs report. Europe’s regional Stoxx 600 share index, which has made gains in July after three consecutive months of losses, traded flat.

Futures trading signalled Wall Street’s S&P 500 equities benchmark, which closed 1.5 per cent higher on Thursday, would lose 0.3 per cent at the opening bell in New York.

The post Euro sinks towards parity with dollar ahead of key US jobs report appeared first on WorldNewsEra. If you’ve been on Twitter in the last few weeks, you know there is no escaping the eye-catching leaks from the set of Barbie, Greta […]

Will Smeed hits 90 off 56 balls as England Lions chase down 319 in just 37.1 overs to beat strong touring South Africa side containing […]

Microsoft is launching a new Defender cybersecurity app across Windows, macOS, iOS, and Android today. While the software giant has used the Defender moniker for […]

Max brings his “ridiculous vision” of a Kill Bill-meets-Austin Powers visual to life in the action-packed silly video for his new single, “Wasabi.” Oh, and […]