Josh Cavallo exclusive: I have Qatar World Cup dream but would my life be in danger?

Josh Cavallo, who last year became the first openly gay player in men’s professional football, says he dreams of representing Australia at this winter’s World Cup – but has questioned whether he would be safe in Qatar.

In an exclusive interview with Sky Sports, the 22-year-old also revealed he had received supportive messages from the likes of Zlatan Ibrahimovic and Antoine Griezmann after coming out, and stated his belief that other professional athletes will follow his lead.

But among the positive reactions to his announcement have been negatives, including the fact that – to realise his ambition of playing for his country at the World Cup – Cavallo would have to be prepared to play in a country where the rights of gay people are heavily restricted.

Nine months after becoming the first known, top-flight male footballer to come out as gay, Adelaide United midfielder Josh Cavallo spoke with Tim Thornton about his life since the announcement and how his decision has helped to inspire others

Amnesty International says women and LGBTQ+ people continued to face discrimination in Qatar and that censorship has increased in the lead up to the World Cup, but asked whether he would be willing to travel to the country for the tournament, Cavallo said: “I’d definitely go to the World Cup, yeah.

“I want to show it’s OK for everyone. It’s not just OK for Josh Cavallo because he’s a footballer and he’s protected, I want it to be OK for that everyday person.

“But it does concern me. If I represent Australia at the World Cup – and I’m pushing for that – it would be an honour but at the same time, the laws clash. I want to do something really good in my career – I’ve always dreamed of playing for my country at the World Cup – but do I want my life to be in danger?”

Cavallo – who was capped at U19 level by Australia but is yet to earn a call-up to the senior side – added: “It’s difficult and a bit sad. It’s hard to pick which one you want to do.

“But in all my messages there’s a lot of people from those countries that have to escape just so they can live freely and be themselves. I hope this changes in the future because it’s not OK the way it’s going right now. It’s something we can definitely turn around.”

Cavallo on ‘incredible’ reaction to coming out 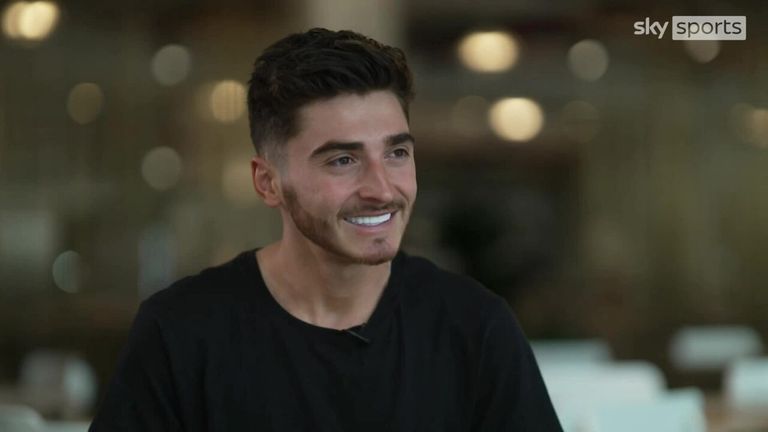 But despite the barriers that remain for Cavallo and other players in his position, the Adelaide United player says he has been delighted by the reaction his announcement in October 2021 that he is gay has generated.

“Honestly, it’s been incredible to see how the world reacted and basically gave me a big hug,” he said. “I didn’t realise the impact my story would have on millions and millions of people around the world.

“It feels like a long time ago – it feels like five years ago for me because I live my days so fully now. It’s been absolutely incredible. I’m very happy and proud of myself that I can help these people better and evolve the game.”

Cavallo says he received an astonishing 700,000 messages within the first 30 minutes of his announcement and, while he understandably couldn’t respond to them all, he says there were some that naturally stood out.

“Obviously the messages from the football stars, your icons like Zlatan Ibrahimovic, [Antoine] Griezmann and [Jesse] Lingard,” he said. “When I was younger I woke up to watch them play early in the morning, so it’s nice to see these straight athletes reaching out and saying, ‘Hey Josh, it’s OK’.”

‘I can be the role model that I didn’t have’

But while the interactions with global superstars have been welcomed, Cavallo says the real benefits of coming out have been the way he has been able to help regular members of society.

“I can be that role model that I didn’t have,” said Cavallo. “Yes, I had Justin Fashanu. Obviously, that ended in a sad story. But I want those kids out there – that little Josh that’s watching – to say, ‘Look at Josh Cavallo – he’s gay and he’s comfortable in his own skin’. That’s the message that I want to get across.”

Cavallo says any abuse he has received – on social media and by a small number of Melbourne Victory supporters in January – was inevitable, and that he is working with developers in Australia on software that will enable social media users to block discriminatory messages from being seen.

Cavallo adds that “for every one bad message, I get 10,000 good”, and appears to be revelling in his role as a positive influence on the likes of Jake Daniels, the teenage Blackpool striker who came out as gay earlier this year.

“It’s nice to get recognition like that but that’s only on the surface,” he said. “Thousands and thousands of athletes across the world are in touch with me and I am helping them through their own journeys. There are going to be more coming out soon, don’t you worry.

“It’s really nice to see these people have somebody to turn to now, because that’s something I struggled with growing up. With football, there was no one I could reach out to, and I want to be that for someone.

Cavallo on his PL dream

While he says he is “honoured” to be seen as a role model off the field, Cavallo is still a professional with goals to fulfil on the field – one of which is to earn a move to the Premier League.

After helping Melbourne to the A-League semi-finals last season, the 22-year-old said: “I’m just really excited to see what the future holds and hopefully I get the opportunity to come and play in Europe. I’ll keep pushing for that and work as hard as I can to get here.

“My dream is to play in the Premier League, and I do want to look into playing at a Championship side or a League One side to keep evolving my game.

“I feel like I’m at that time in my life right now where I’m ready for that change, I’m ready to take that step forward in my footballing career.

“I got to where I am now because I’m a footballer, not a gay footballer. I still have a lot of work to do – I’m still 22, I’m still early in my career, I’ve got lots of years left in me. But I’m really excited for the future and I’m ready to put my head down and work hard on the football field.”

The post Josh Cavallo exclusive: I have Qatar World Cup dream but would my life be in danger? appeared first on WorldNewsEra. Epic Games thinks it has a solution for review bombing

Epic Games has finally introduced a ratings system to its online store, and it’s designed in a way that’s intended to prevent waves of negative […]

Please and thank you: Cannabis startup Polite sells science-backed products to treat yourself

Twitter tests Twitter Notes with select users, for creating long-form content with rich text formatting and uploaded media that can be tweeted upon publishing (Sarah Perez/TechCrunch)