Stock Of The Day: Military-Modernization Play Near Buy Point 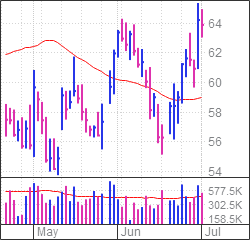 Mercury Systems (MRCY), a tech firm serving the aerospace and defense industries, is the IBD Stock Of The Day. Similar to other defense stocks, shares of Mercury are setting up in a consolidation.

The setup for the company — which serves the government, aerospace giants like Boeing (BA) and big defense contractors like Lockheed Martin (LMT) — arrives as Russia’s war in Ukraine boosts defense spending, and as the defense industry outsources more work and tries to modernize its tech infrastructure.

Mercury Systems stock fell 0.5% to 64 in the stock market today. Shares are consolidating. The buy point on that pattern is 72.38. But investors could also use 64.45 as an early entry.

MRCY stock has a strong 93 Composite Rating. Its EPS Rating is 70.

The relative strength line is at a 52-week high. A rising RS line signals the stock is outperforming the S&P 500.

Among other defense stocks, Lockheed Martin, which makes the F-35 fighter jet, edged up 0.85%. LMT stock is right at its 50-day line after rebounding from its 200-day. General Dynamics (GD) edged up 1.2%, between those two moving averages.

Northrop Grumman (NOC), the defense outfit best known for the stealth bomber, rose 1.6% to 486.37. The company, which is also one of Mercury’s customers, was Thursday’s Stock Of The Day. NOC stock is actionable from the 50-day line and a prior buy point.

Mercury was founded in 1981 and is based in Andover, Mass. The company makes chips, storage devices, processing boards and other systems for communications, image intelligence and mission planning, according to its annual report.

Defense Stocks Rise On Other Tensions

Russia’s invasion of Ukraine lifts defense stocks and demand for missiles and other weapon systems. President Joe Biden, at a NATO summit on Thursday, said the U.S. was planning to send an additional $800 million worth of weapons and other aid to Ukraine.

More broadly, Mercury has also cited China’s “militarization and power projection” as a driver of demand.

Mercury CFO Michael Ruppert, during a conference in June, also said that “a wave of modernization” across military systems was driving more demand for electronics. And he said many customers were having difficulties staffing up or replacing an aging workforce, leading to more outsourcing as the industry rebounds.

“So as the industry has returned to growth, we’re actually seeing an increase in the outsourcing trend that we talked about, which is our largest secular growth driver,” he said.

Return To The Office? CEOs Learn To Love Remote Workers, For Now

Amid Market Woes, Don’t Feed The Bear; Tesla Deliveries Due

The post Stock Of The Day: Military-Modernization Play Near Buy Point appeared first on WorldNewsEra.

Previous Article RadioShack, which was bought by a PE firm in 2020, has become an online cryptocurrency company trying to attract users with a stream of often-profane tweets (Yiwen Lu/Washington Post)
Next Article This Is When You Can Order Your Fisker Ocean Launch Edition

IMPACT Slammiversary 2022 marks the 20th anniversary of the promotion once known as TNA Wresting, and the occasion has prompted fans and wrestlers alike to […]

With so much of the world’s richest man’s wealth tied up in shares of his electric car company, Tesla is a part of the deal […]